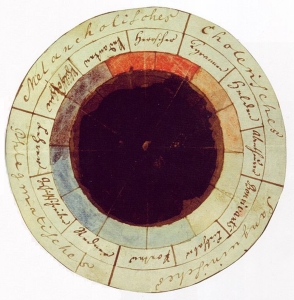 “The Rose of Temperaments” was a colour diagram devised by Goethe in the late 18th century, which matched colours with associated psychological and human characteristics. The artist Paul Evans has chosen this as a title for a project which forms part of Sheffield University’s Festival of the Mind; for it six poets have each written a sonnet associated with a colour. Poems by Angelina D’Roza , A.B. Jackson and Chris Jones have already appeared on the project’s website; the other three will be published here over the next few weeks, including the piece by Helen Mort, from which my opening excerpt is taken.

Goethe’s theory of colour was a comprehensive cataloguing of the affective qualities of colours as humans perceive them, conceived in part as a reaction to the reductionism of Newton’s optics, much in the same spirit as Keats’s despair at the tendency of Newtonian philosophy to “unweave the rainbow”.

But if Newton’s aim was to remove the human dimension from the analysis of colour, he didn’t entirely succeed. In his book Opticks, he retains one important distinction, and leaves one unsolved mystery. He describes his famous experiments with a prism, which show that white light can be split into its component colours. But he checks himself to emphasise that when he talks about a ray of red light, he doesn’t mean that the ray itself is red; it has the property of producing the sensation of red when perceived by the eye.

All this is made clear in the context of our modern physical theory of colour, which was developed in the 19th century, first by Thomas Young, and then in detail by James Clerk Maxwell. They showed, as most people know, that one can make any colour by mixing the three primary colours – red, green and blue – in different proportions.

Maxwell also deduced the reason for this – he realised that the human eye must comprise three separate types of light receptors, with different sensitivities across the visible spectrum, and that it is through the differential response of these different receptors to incident light that the brain constructs the sensation of colour. Colour, then, is not an intrinsic property of light itself, it is something that emerges from our human perception of light.

In the last few years, my group has been exploring the relationship between biology and colour from the other end, as it were. In our work on structural colour, we’ve been studying the microscopic structures that in beetle scales and bird feathers produce striking colours without pigments, through complex interference effects. We’re particularly interested in the non-iridescent colour effects that are produced by some structures that combine order and randomness in rather a striking way; our hope is to be able to understand the mechanism by which these structures form and then reproduce them in synthetic systems.

What we’ve come to realise as we speculate about the origin of these biological mechanisms is that to understand how these systems for producing biological coloration have evolved, we need to understand something about how different animals perceive colour, which is likely to be quite alien to our perceptions. Birds, for example, have not three different types of colour receptors, as humans do, but four. This means not just that birds can detect light outside human range of perception, but that the richness of their colour perception has an extra dimension.

Meanwhile, we’ve enjoyed having Paul Evans as an artist-in-residence in my group, working with my colleagues Dr Andy Parnell and Stephanie Burg on some of our x-ray scattering experiments. In addition to the poetry and colour project, Paul has put together an exhibition for Festival of the Mind, which can be seen in Sheffield’s Millennium Galleries for a week from 17 September. Paul, Andy and I will also be doing a talk about colour in art, physics and biology on 20 September, at 5pm in the Spiegeltent, Barker’s Pool, Sheffield.